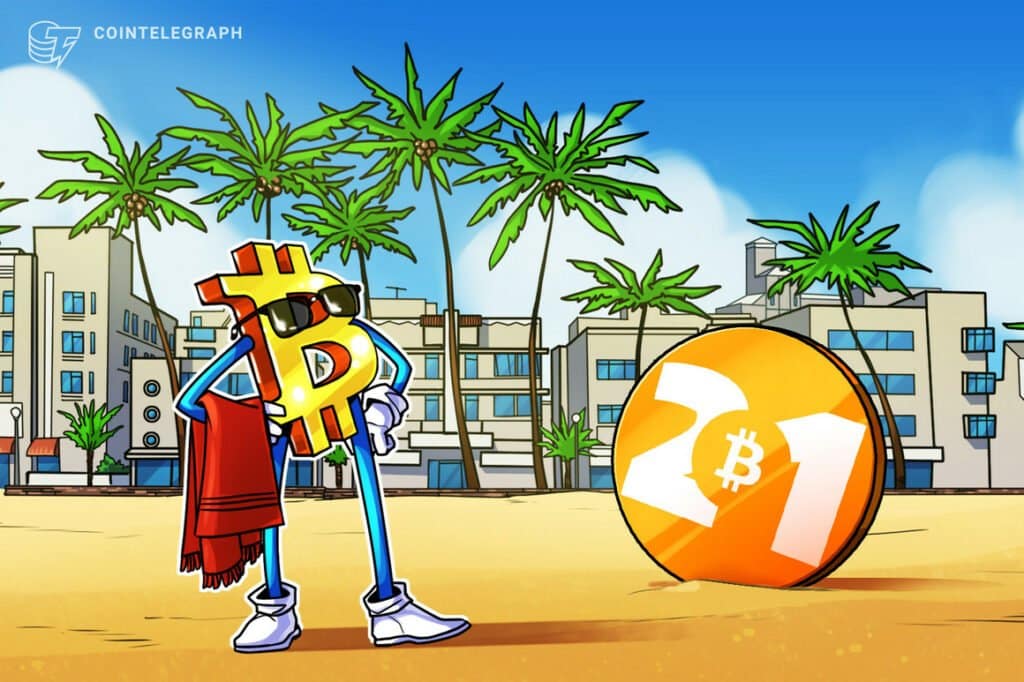 From Thursday through Saturday, a throng of crypto faithful will gather at the Mana Wynwood Convention Center in Miami for the Bitcoin 2021 conference.

Bitcoin 2021 perhaps holds even greater significance than usual, as participants can gather in a physical location after COVID-19 restrictions forced many other crypto conferences to go virtual.

This year’s conference boasts a stellar cast of members of Congress, celebrities, cryptographers, CEOs and other crypto proponents, with the total attendance anticipated to exceed 50,000 people.

Some of the personalities expected at the event include Miami Mayor Francis Suarez, Bitcoin (BTC) permabull and MicroStrategy CEO Michael Saylor, Twitter’s Jack Dorsey and the Winklevoss twins — Cameron and Tyler Winklevoss — among others.

Mayor Suarez recently revealed that he bought Bitcoin after the United States Senate passed its $1.9 trillion stimulus bill back in March.

Bitcoin 2021 will also see pro-crypto government officials like Wyoming Sen. Cynthia Lummis as well as former heads of U.S. financial watchdogs like Chris Giancarlo and Brian Brooks. Giancarlo is a former chairman of the U.S. Commodity Futures Trading Commission, while Brooks recently served as the acting comptroller of the currency.

On topics related to scalability, Zap CEO Jack Mallers will talk about businesses utilizing the Lightning Network, while the MIT Bitcoin Project’s Jeremy Rubin will appear in a panel titled “Bitcoin is DeFi.”

With the recent criticisms of Bitcoin mining, it is perhaps unsurprising to see a few panels dedicated to the subject, with titles like “The Moral Case for Bitcoin” and “Bitcoin Mining Fixes Our Energy Problems.”

Other panels planned for the event will explore topics concerning on-chain analytics, proof of reserves and banking the unbanked.

Cointelegraph’s editorial team will be on sight to provide the latest updates on the biggest events as well as to conduct interviews and even livestreams through YouTube and Twitter. Stay tuned!