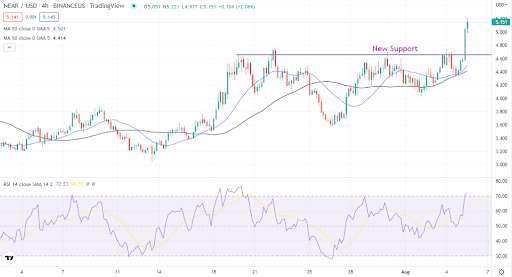 Near Protocol NEAR/USD has jumped by 16% in the past 24 hours. The bullish sentiment is because of significant interest among investors in the protocol lately. Its trading volumes are up 47% in the past day at $681,243,479.

Near Protocol is a decentralized smart contract network that rivals Ethereum. It differentiates itself with the use of sharding technology to increase transaction throughput. Sharding segments a network infrastructure and lets nodes handle a fraction of it.

Transaction speeds have been a major challenge to the larger blockchain networks. Near Protocol is making a name for itself in space. It is attracting lucrative blockchain projects that are boosting its total value locked.

One such project is Sweatcoin, a protocol that mints tokens with the steps taken by users. The funds flowing into the project have pushed NEAR Protocol’s TVL to $388 million. A look at the short-term technical outlook affirms a strong bullish momentum in Near Protocol.

NEAR breaks above key resistance but is currently overbought

From the 4-hour technical chart above, NEAR has broken above the $4.6 resistance. The cryptocurrency had failed in the last four attempts to pierce above the level. Further, the 20-day and 50-day moving averages have joined the support.

However, NEAR could be preparing for a short-term retracement. The RSI is at the overbought zone. At 72, the momentum indicator is at the highest level since July 29.

NEAR token is under a strong bullish momentum. The fundamentals around sharding technology and its fast and cheaper transaction speeds boost popularity. Nonetheless, the token could be facing a retracement, with RSI reading currently at the overbought zone. Investors should wait for the retracement before entering a long position.