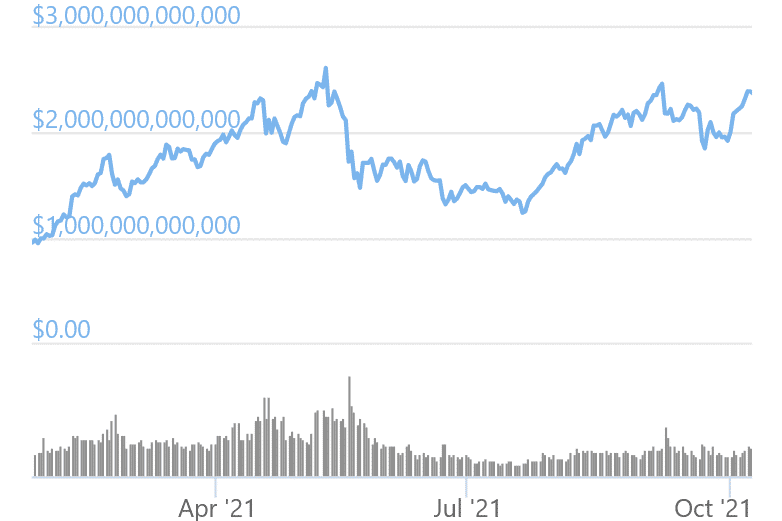 The total crypto market capitalization crossed the USD 2.5trn mark today, and is for the first time since May short distance away from its all-time high of USD 2.57trn reached that same month. Meanwhile, bitcoin (BTC) dominance is lower today than when the coin’s price peaked in mid-April.

The important USD 2.5trn mark has been reached after the crypto market has seen significant gains in recent days – with the market capitalization growing by USD 110bn since Wednesday alone.

Further, today’s milestone also means that the market capitalization of all cryptoassets has risen by more than 30% in just over two weeks, moving from USD 1.84trn on September 29 to USD 2.44trn as of noon UTC on October 15.

The rise in market capitalization followed strong gains in the price of bitcoin, helped by the reports that the US Securities and Exchange Commission (SEC) is set to allow the first bitcoin futures-backed exchange-traded fund (ETF) to be listed in the US next week.

Meanwhile, it is worth noting is that bitcoin’s dominance of the overall crypto market valuation is lower now than during the all-time high which the bitcoin price hit in April. Back then bitcoin’s share of the crypto market made up about 54%. As of today, the bitcoin dominance is around 44%-46% (depending on a data provider), having remained relatively stable around 40% since mid-May.

The slightly lower bitcoin dominance this time around indicates that more altcoins are experiencing growth in their market capitalizations. However, it is also important to note that the number of altcoins is constantly rising, which, all else equal, reduces bitcoin’s share of the crypto market.

Commenting on the latest price moves in the crypto market, Ruud Feltkamp, CEO of the crypto trading bot Cryptohopper attributed much of the gains to the historically good performance seen in October.

“October is almost always a good month historically, and this year is very similar to 2017. Before Bitcoin breaks its ATH, first it has always had trouble breaking through the great resistance. Once broken though, it will be a long volatile road to the top. In 2017, the top was between Christmas and the New Year. Will this year be the same? I think so,” Feltkamp wrote in an emailed comment.