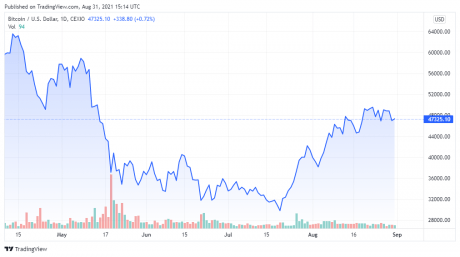 Perfect timing and place for a Lightning Network Conference. In less than a week, Bitcoin will be legal tender in El Salvador. The Lightning Network was instrumental for this to happen. The real-life case study for the Lightning Network is El Zonte AKA Bitcoin Beach. And in Mid-November, all of those factors will collide in an event aptly titled “Adopting Bitcoin.”

Related Reading | How Big Is Bitcoin’s Lightning Network? The Answer Will Surprise You

This Lightning Network conference comes with a call-to-action as its unofficial slogan, “Unite, focus, collab!” And, by the looks of Adopting Bitcoin’s official Twitter, the tribe responded to the call and will attend en masse.

The focus: transitioning 6+ million people onto the Lightning Network!

What Characteristics Does This Lightning Network Conference Have?

“… is bringing together the Bitcoin and Lightning community in San Salvador and El Zonte to create connections and foster the future of money and payments in the Central American republic.”

The Lightning Network Conference has the following characteristics:

Tuesday and Wednesday are full conference days in San Salvador.

Thursday is more casual in El Zonte. We will have an organized Bitcoin Bazaar 10a-4p…. with kiosks, stands and food stalls anchored at / near Hope House.

Adopting Bitcoin: Lightning Summit in El Salvador. Dates: 16 – 18 November 2021. Tickets can only be paid on the #Bitcoin #LightningNetwork. All proceeds of the conference will be donated to the development of the Lightning Network. https://t.co/vZzQb6MOy9 pic.twitter.com/ivizhyD960

Tuesday and Wednesday, the party is in San Salvador’s Sheraton Presidente. Both days contain “Lightning 101” workshops. Among the star lecturers are:

On Thursday 18, the party moves to El Zonte and ends with a literal Taproot Activation Party in El Tunco. For a video tour of both towns, check this mini-documentary out.

About Galoy, Organizers Of The Lightning Network Conference

According to their official website, “Galoy offers easy to use Bitcoin ‘Banking-as-a-Service’ (BaaS) products.” They are responsible for the self-referential official wallet for the Bitcoin Beach project. “In October 2020, we launched our branded “Bitcoin Beach” Lightning Wallet in El Zonte.” Galoy describes itself as:

“… a B2B company, serving organizations that embrace Bitcoin as money. We build on the Bitcoin Protocol and the Layer 2 Lightning Network, utilizing the tools created by the team at Lightning Labs.”

And now, they’re contributing to the Bitcoin ecosystem with this not-for-profit Lightning Network Conference in El Salvador. One that requires that you actually use the novel network to purchase the coveted ticket. And donates all proceeds to Lightning development.

$15.5K retest is more likely, according to Bitcoin futures and options