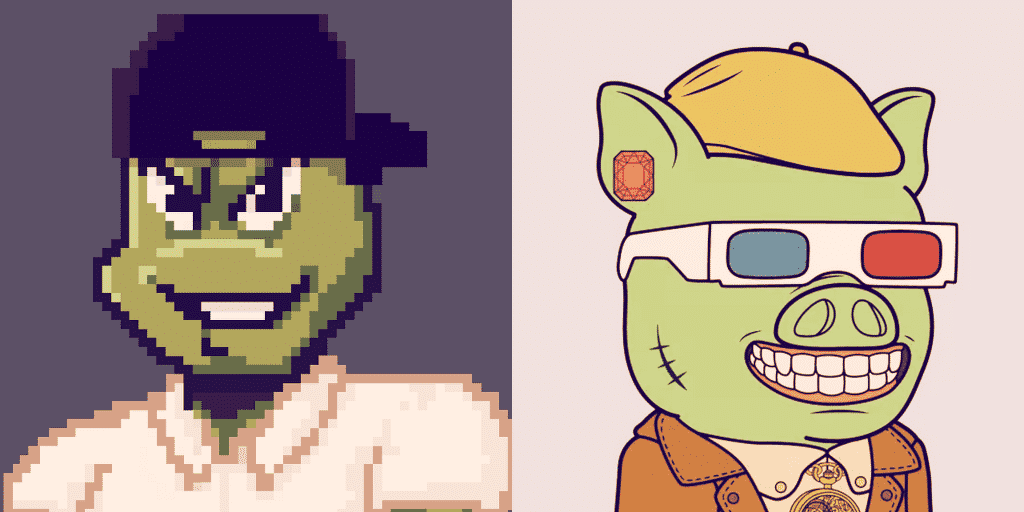 Solana’s NFT ecosystem has accelerated quickly over the last couple months, generating hundreds of millions of dollars’ worth of trading volume as dozens of projects popped up. Earlier this week, cryptocurrency exchange FTX US made a big splash in the space with the launch of its FTX NFTs marketplace—but it’s different from other Solana NFT platforms.

Like the U.S. exchange itself, FTX NFTs is a centralized platform—under the jurisdiction of US regulators—that requires know-your-customer identification checks. And unlike smaller, existing Solana marketplaces like Solanart and DigitalEyes, FTX NFTs will not list projects that reward holders with a share of secondary market sales in the form of cryptocurrency payments.

Why? As FTX US President Brett Harrison told Decrypt ahead of the launch, such royalty-like, reward schemes—which provide ongoing passive income to holders via revenue sharing—make those NFTs act like securities. That puts them under potential regulatory risk via the United States Securities and Exchange Commission (SEC).

Some projects and NFT collectors pushed back on the idea of a major player like FTX US muscling into the market and setting new terms or standards. Meerkat Millionaires Country Club, a popular NFT project that has reportedly generated $260,000 worth of SOL royalties to distribute to holders, refused to change.

“Large organizations entering the crypto space should use their size to defend the legitimacy of the community and current innovations,” the Meerkats team wrote on Sunday. “The crypto community needs partners, not gatekeepers.”

However, FTX’s influence appears to be catching on. Several Solana-based NFT projects with royalty-like schemes have announced that they are changing course and will cancel or alter those plans. Avatar projects like Turtles, Solarians, and Toasty Turts have all made similar announcements this week.

Harrison said that he’s been in contact with creators of about 10 projects that are making changes to meet the FTX US guidelines. “In almost every case, the creators of the project were unaware of the potential regulatory risks, and learning about them was the main reason for their decision to move to a different model,” he told Decrypt.

Turtles on Solana—a collection of 3,333 algorithmically-generated NFT avatars—is one of the projects that changed its plans this week. Instead of providing a share of secondary sales to NFT holders, the creators plan to “sweep the floor” with funds generated so far, or buy up the lowest-priced NFTs to try and boost the valuation for remaining owners.

Speaking via Twitter DMs, a representative for the project told Decrypt that getting the project listed on FTX NFTs was a primary motivator for canceling royalty payments to other NFT holders. However, the future prospect of regulatory headaches was also a key consideration.

“We wanted to be on FTX because we thought FTX can bring us more people and more liquidity,” the Turtles team wrote. “Even if we choose not to list on FTX, sharing royalty revenue will expose the project to compliance issues in the future, which is not beneficial for the holders in the long-term… maybe it could be bad in the future for holders.”

In a related case, a rival Solana NFT marketplace—Alpha Art—that pays a share of sales as a royalty to Piggy Sol Gang NFT holders, has faced some resistance. The creators of Solana NFT project Galactic Gecko Space Garage (GGSG) issued a lengthy tweet thread on Tuesday complaining about Alpha Art’s use of its branding and imagery, in light of its royalties scheme. Harrison described the conflict as an “indirect result” of FTX NFT’s stance on the subject.

“GGSG is not comfortable with the legal risk associated with being listed on Alpha Art as we are striving to ensure compliance with all applicable laws. This poses danger to GGSG and GGSG’s community,” the project tweeted. “NFT issuers or marketplaces claiming decentralization are not above any laws and any such projects found to be in violation of applicable securities laws may face enforcement action from the SEC.”

Just today, the Piggy Sol Gang project announced via its public Discord server that it also will change its royalty rewards program following consultation with securities lawyers. The group suggested that the “floor sweep” option chosen by Turtles and other projects still creates an “expectation of profit,” so Piggy Sol Gang is exploring other options.

One suggested option is to “geo-block” U.S. residents from accessing features around the NFTs. Another is to launch a DAO, or decentralized autonomous organization, to handle decisions around royalties and let the community choose the path forward.

In the latter case, the Piggy Sol Gang team apparently hopes that keeping the process at arm’s length will shield it from potential securities issues. Decrypt has reached out for additional comment and details.

FTX’s understanding of the law is that NFTs that distribute royalties as ongoing income for holders fall under the Securities Act of 1933, Harrison said. Enacted by the U.S. Congress during the Great Depression, it’s a piece of legislation that is frequently cited in the crypto industry as it matures and receives greater scrutiny from regulators.

“They are an asset that entitles the owner to passive income in proportion to the profits of an asset pool,” said Harrison of NFTs that pay royalties to holders. “There’s a lot of debate in the broader crypto community about whether 20th-century securities laws should apply to digital assets and DeFi. That’s obviously an important question, but it’s not a pretext for disregarding the securities laws we actually currently have.”

It’s common for NFT creators to earn royalties from secondary market sales, and Preston Byrne—a partner at law firm Anderson Kill—told Decrypt that such models should not run afoul of securities laws. However, it’s a different case when paying out royalties to buyers and holders of those NFTs, and the SEC could be compelled to take action against projects that offer assets deemed to be unregistered securities.

“In that case, the creator would not be selling a collectible, but rather would be selling an income stream,” said Byrne. “To the extent that such sale is an investment of money in a common enterprise which creates an expectation of profits, this could be deemed a security by the SEC. If that were the case, it would only be tradable by the public on a national securities exchange.”

Ethereum-based marketplace OpenSea—a decentralized, peer-to-peer exchange, rather than a centralized one like FTX NFTs—recently delisted the DAO Turtles project, purportedly due to violating its regulations by providing passive income to NFT holders. However, OpenSea still lists other projects that provide passive income to holders, such as CyberKongz Genesis NFTs and Anonymice.

“FTX US might be more sensitive to this issue than other marketplaces, due to the fact that it operates more closely to the edge of the SEC’s regulatory perimeter than a platform like OpenSea does,” Byrne suggested.

Understandably, some people are very upset by these moves—particularly those individuals who bought an NFT for hundreds or even thousands of dollars with the expectation that it would provide passive income. Some have described such changes as a “rug pull,” indicating that false expectations were set and that projects that changed plans have scammed buyers.

Solarians previously planned to offer NFT holders a cut of sales generated by the DigitalEyes marketplace—a potentially enticing hook to buyers, given how quickly the Solana market has grown. Now it won’t, and some of the response from holders has been fiercely negative.

Ultimately, NFT creators have to weigh potential community backlash and NFT value drops with a desire to be listed on FTX NFTs, on top of complying with securities regulations.

Harrison suggests that being proactive and playing it safe are preferable to riding out short-term rewards—and that making a change now may be smarter than trying to figure things out if the regulatory spotlight gets brighter in the future. He said that creators have “done a really great job of educating their members on the regulatory risks” and substitute reward models.

“Ultimately, I think it’s better that the regulatory risks that are currently prevalent in the NFT landscape be openly discussed as early as possible,” said Harrison. “It’s better for projects to proactively learn about and come into compliance with U.S. securities laws now, rather than wait until later when there may be greater direct scrutiny from regulators.”