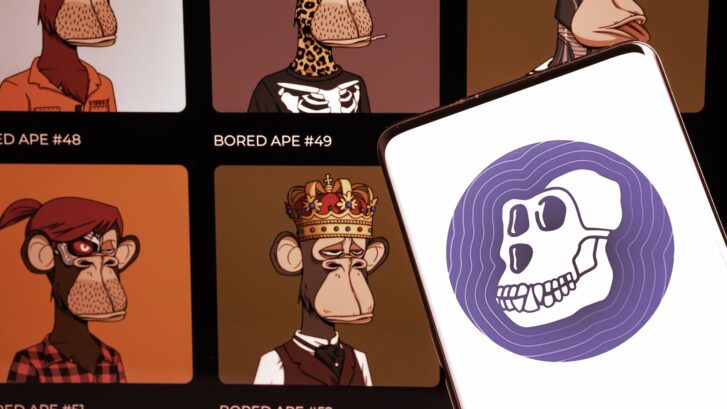 Leading Solana NFT marketplace Magic Eden only announced its entry into the Ethereum market one week ago and already it’s gunning to serve the best-known community in the space. Magic Eden today unveiled a proposal to build a Bored Ape Yacht Club marketplace for the ApeCoin (APE) community.

According to the proposal, the planned ApeCoin marketplace—which would operate via the official ApeCoin website and be based on Magic Eden’s technology—would provide certain advantages to Bored Ape NFT holders, including lower trading fees.

“Magic Eden is going to ETH L1, and the ApeCoin DAO community is a fantastic place to start—we're swinging for the fences,” Magic Eden General Counsel Joe Doll told Decrypt.

Magic Eden’s pitch includes the ability for collectors to bid on NFTs using a combination of both ETH and ApeCoin, as well as a discount for those users buying with APE. The proposed marketplace would offer lower sellers’ fees than Magic Eden’s own marketplace (2%), let alone leading Ethereum NFT marketplace OpenSea (2.5%).

“We think that our sheer ability to execute, combined with our efforts to connect with the ApeCoin DAO community and ensure that their marketplace vision is heard and executed, sets us apart from any other marketplace in crypto,” Doll said.

Magic Eden has offered to build the marketplace for free as part of the proposal, which will be considered by the community. If put up for a formal vote as an ApeCoin Improvement Proposal (AIP), then ApeCoin holders will be able to vote for or against passage of the plan. Magic Eden claims that it can deploy the marketplace as soon as September if the proposal is ultimately passed.

Additional features could be added down the line as well, including a launchpad for creating and distributing new ApeCoin-related NFT projects, as well as the ability for Bored Ape creator Yuga Labs to sell merchandise through the platform if it chooses to do so.

Magic Eden launched last fall and quickly became the dominant player in the growing Solana NFT market, consistently commanding 90% or more of daily trading volume of late and notching a $1.6 billion valuation in June as it raised $130 million.

With its move into Ethereum, Magic Eden is taking a direct shot at OpenSea, currently the top marketplace across the NFT space. Getting the Bored Ape community onboard could help cement Magic Eden’s position in the Ethereum space.

“The pitch was inspired by the immense respect we have for the BAYC community and all of Yuga Labs’ IP communities,” said Tiffany Huang, Magic Eden’s content and marketing head. “We want this marketplace to be the first of a long-term relationship.”

“We believe this positions our pitch to bring a strong value offer to the ApeCoin DAO community in the form of product building, community support, and general Ape culture integration into our technology stack,” she said. “As we build on our growth, we want this marketplace to be co-built by the Apes, for the Apes, with minimal effort and no funding required from the community.”

An NFT is a blockchain token that represents ownership in an item, such as profile pictures, artwork, collectibles, and interactive video game items. The market has already yielded about $20 billion worth of trading volume so far in 2022, per data from DappRadar, after surging to $25 billion across all of 2021.

ApeCoin is an Ethereum-based token designed to power the growing Bored Ape Yacht Club ecosystem, including metaverse apps and games. It was launched in March, with sizable token allotments provided for free to Bored Ape NFT holders, and the price has fluctuated wildly since. At just over $7 per token right now, it’s up more than 40% over the last 30 days.

The ApeCoin ecosystem is administered by a DAO, or decentralized autonomous organization, with token holders able to vote on proposals that potentially benefit the community. A DAO is a crypto community united by a shared goal or purpose, including operating a protocol, and membership is often represented by tokens.

Previously, blockchain networks have made proposals to try and move the ApeCoin ecosystem off of Ethereum’s mainnet. Rival network Avalanche made a pitch in May, and Ethereum scaling network Immutable X followed suit. Neither proposal idea went up for a formal vote, although the DAO did vote in May in favor of “[keeping] ApeCoin within the Ethereum ecosystem.”

The Bored Ape Yacht Club is one of the most valuable NFT projects on any blockchain, and the collection has yielded more than $2.3 billion worth of secondary trading volume to date, per data from CryptoSlam. Spinoff projects like the Mutant Ape Yacht Club and Otherside metaverse game have also done well, pushing the franchise’s collective trading tally over $5 billion to date.

What is regenerative finance (ReFi) and how can it impact NFTs and Web3?