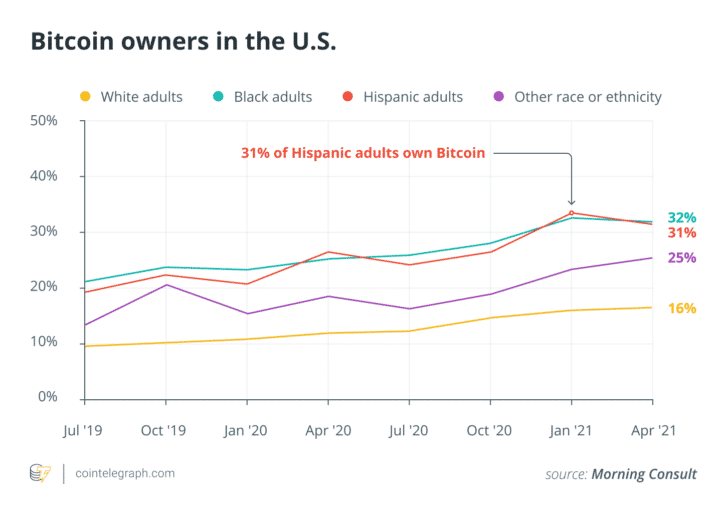 Digital assets have recently become more and more prevalent in our daily lives — in the news, popular culture and our personal interactions. In the first quarter of 2021, the number of global daily Bitcoin (BTC) transactions hit 367,536. Bitcoin alone now accounts for around $20 billion of daily online transactions. Not only this, but those who are familiar with digital assets and cryptocurrencies trust them implicitly — Binance’s “Global Crypto User Index” for 2021 shows a 97% confidence in cryptocurrencies.

Proportionally, members of Latinx communities in the United States have some of the highest rates of crypto adoption, with approximately 31% of Hispanic people owning Bitcoin and the same data stating that 25% of Bitcoin owners are Latinx. There are many reasons behind this impressive rate of adoption, not least of which is the fact that this group has less access to traditional wealth. In 2016, Latinx families held less than one-sixth the wealth of white families and were several times more likely to support family members not living with them. In 2020, Mexican people living in the United States sent over $40 billion to family members in Mexico, and many of these transfers took place through cryptocurrency.

While Latinx communities seem to be at the forefront of adopting digital assets and using them to improve their daily lives, it is important that those in the cryptocurrency and digital asset industries make efforts to include marginalized groups in their future plans and to integrate with and embrace these communities, to continue on this upward trajectory of adoption and to ensure that everyone is aware of the wide range of benefits digital assets can provide.

It is only a matter of time before digital assets reach full proliferation in Latin America. For example, look at El Salvador’s decision to become the world’s first country to classify Bitcoin as legal tender. Citizens in El Salvador can now receive $30 worth of Bitcoin when they download and register on the government’s cryptocurrency app, Chivo. Taxes can be paid in Bitcoin, and prices will be displayed in either BTC or U.S. dollars. A major driver of the law is to help people elsewhere in the world who are sending remittances back to El Salvador, as these payments generally suffer from high transaction and commission fees when done through fiat currency.

Argentina is following El Salvador’s lead, with members of Argentina’s National Congress recently submitting a bill that will allow Argentine people to accept their salaries in Bitcoin. Cuba, Paraguay and Uruguay have all indicated that they will officially recognize and regulate cryptocurrency in their countries in the immediate future. Leaders in Argentina, Brazil, Panama and beyond have endorsed El Salvador’s action on social media.

Assisting migrants who are sending remittances to their family and friends in their countries of origin is just one example of how digital assets can empower people. Bill payment services via blockchain technology could also be life-changing for people in marginalized communities. Payments via blockchain are more secure, faster and often more cost-effective than traditional methods — and do not require access to traditional banking and payment channels. This is particularly significant, as a large number of those in marginalized communities do not have access to a bank account. While they make up only 32% of the U.S. population, Black and Latinx households represent 64% of its unbanked and 47% of its underbanked.

Those from marginalized communities have shown their tenacity and determination in how they have innovated and used these new technologies to their advantage, overcoming the limitations traditional finance has placed upon them. These groups are among the most familiar with crypto in the United States and are quick to adopt and use the technology.

It is now the role of the crypto industry, governments and organizations to reach out to marginalized communities and cater to them specifically, integrating with their communities and showing them how they can further benefit and change their day-to-day lives for the better. If enterprises and regulating bodies can learn about the cultures and traditions of these communities, they can understand their needs and can accommodate these requirements in a mutually beneficial way.

Related: Mass adoption of blockchain tech is possible, and education is the key

Digital assets use blockchain technology, which is generally considered to be one of the most secure options for transactions and payments; however, this may not initially be clear to those unfamiliar with the concept and concerned about the security of their money and payments. With the right understanding and educational initiatives, we can help adopters of cryptocurrencies to choose secure, regulated and licensed digital asset providers, so that they can transact with peace of mind.

Widespread crypto adoption is still in its early days, and many obstacles still exist. Strong government ties to traditional banking in many countries will drive skepticism of digital assets. Taking a top-down approach, it is imperative that governments and industry leaders reinforce this innovative, hugely beneficial technology. By creating a safe, regulated environment for crypto and facilitating healthy discourse and education on the topic, we can empower and transform citizens’ lives even further.

This article does not contain investment advice or recommendations. Every investment and trading move involves risk, and readers should conduct their own research when making a decision.

The views, thoughts and opinions expressed here are the author’s alone and do not necessarily reflect or represent the views and opinions of Cointelegraph.