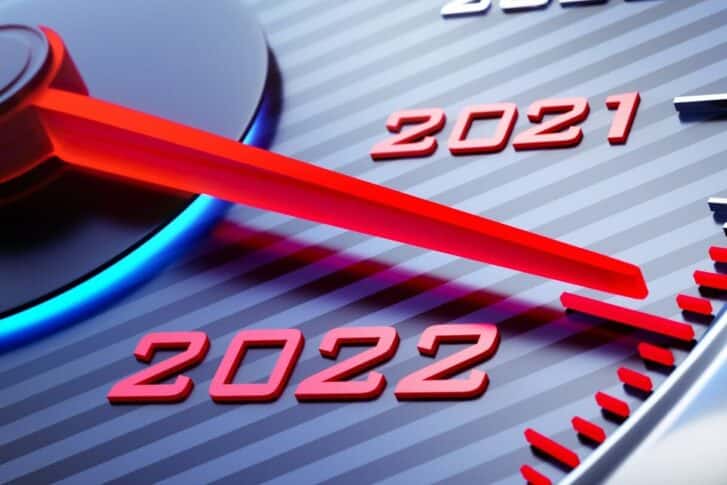 The crypto market is having a strong end to 2021, with various cryptoassets — including bitcoin (BTC) — hitting new all-time highs. The question is: will we continue seeing increasing adoption of cryptocurrencies among investors, institutions, and even governments next year?

For most analysts and observers, 2022 will indeed be yet another year of increasing adoption of cryptocurrency, both in terms of its potential as an investment vehicle and inflation hedge, and also in terms of its utility for payments.

Of course, 2022 will not all be plain sailing for cryptocurrency when it comes to adoption, with governmental rejection of crypto remaining just as (if not more) likely in some nations as adoption. That said, with the market showing renewed signs of bullishness as we write this, it’s likely that the overall trend will be towards more adoption rather than less.

2021: How accurate were predictions last year?

Back in 2020, industry players predicted that bitcoin would see increasing investment interest from institutions in particular. This is indeed what happened, with the current bull market being largely driven by institutional investors.

They predicted the growth in Ethereum (ETH) and decentralized finance (DeFi), with the latter (in terms of total value locked in) growing, per DefiLlama data, from around USD 21bn at the start of the year to USD 241bn, as of writing. Likewise, Ethereum accounts for 67% of this value, indicating just how pivotal it has become.

One other thing the commenters predicted in our previous year’s ‘adoption trends’ article was the growth in interoperability platforms and protocols, something which would allow chains to pool resources and value. This was particularly true with regards to the launch of the various cross-chain bridges we saw during this year, such as Wormhole, Avalanche Bridge, and Harmony.

Given that a new bull market driven by institutions appears to be emerging, it may come as no surprise to learn that analysts are predicting even more institutional adoption of BTC and other cryptocurrencies in 2022. In part, this should be driven by growing inflationary fears, as well as by the increasing normalization of crypto, something helped by new exchange-traded funds (ETFs).

“After the successful launch of [the ProShares] BITO ETF, regulators in the US and elsewhere will be less resistant to more bitcoin and other crypto ETFs. As a result, I expect we’ll see increased institutional adoption of bitcoin and crypto as an investment vehicle going forward,” said Fawad Razaqzada, an analyst at ThinkMarkets.

For OKEx’s director Lennix Lai, the approval of ETFs really does open the door to significantly increased institutional adoption of cryptocurrencies in 2022.

“We definitely believe with the launch of the Bitcoin ETF, it will attract higher adoption across the spectrum. Reason being more traditional retirement plans, pension funds, brokerage accounts will not accept crypto investments, which is where the bitcoin ETF comes into place,” he told Cryptonews.com.

Other analysts largely agree with this overview, even if they note that it’s dependent on various factors. Simon Peters, an analyst with eToro, notes that institutional investors have accounted for increasing inflows into bitcoin for several weeks now, and that this trend will likely continue as more institutions come to adopt BTC as an investment vehicle and inflation hedge.

Peters adds that the likelihood of increased institutional involvement with bitcoin will rise if the US Securities and Exchange Commission (SEC) approves a spot ETF (i.e. one where the fund actually holds BTC).

“Investors (both institutional and retail) who have been interested in bitcoin and cryptoassets more broadly, but are reluctant to buy the underlying asset due to concerns around regulation/insurance, etc. may feel more comfortable getting exposure via an ETF instead,” he said.

For Ben Caselin, the head of research and strategy at AAX, the approval of a spot-based Bitcoin ETF will be vital if institutional adoption of cryptocurrency is to really take off next year.

“Before we see larger players come into the market, we would need to see more ETFs pass the bar, including physically-backed ETFs. As the pressure continues to build on the Federal Reserve and central banks in general, we can expect more capital to flow from traditional inflation hedges to bitcoin,” he told Cryptonews.com.

Others suggest that while SEC approval is welcome, institutions will continue embracing bitcoin regardless in 2022, simply by virtue of its market growing in size.

“As the ecosystem grows in scale, their involvement is inevitable.  At the margin, the SEC’s latest move brings that inevitability a little closer,” said Lou Kerner, the head cryptocurrency analyst at Quantum Economics.

With El Salvador officially adopting bitcoin as legal tender in September, there’s also a distinct possibility that other nations will follow its example in 2022. However, this depends on just how successful El Salvador’s embrace of BTC ends up being, with many nations in similar situations mostly observing from a distance for now. As reported, the CEO of the crypto exchange giant BitMEX Alexander Höptner estimates that “at least five countries” will “accept bitcoin as legal tender” before next year is out.

“I think most would-be countries are just sitting back and watching to see how El Salvador’s economy will evolve with the adoption of BTC as legal tender. If successful, I am sure more countries will follow suit — if not fully like El Salvador, then at least in other ways — especially those with weak economies and where currency crises are prevalent,” said Fawad Razaqzada.

Ben Caselin also suggests that future adoption of bitcoin as legal tender depends quite heavily on El Salvador. Nonetheless, if things do go well, there are other countries that may similarly stand to gain from adoption.

“In countries like Mexico, Peru, and Colombia, unbanked communities comprise more than 50% of the population. In South East Asia, in countries such as the Philippines and Indonesia, we find similar figures,” he said.

While he doesn’t necessarily expect more formal adoption to take place in 2022, he does suggest that “we will see countries signaling their interest” in moving closer to crypto next year.

On the other hand, some analysts say it’s almost inevitable that other nations will turn to bitcoin and other cryptocurrencies in one way or another, if not in 2022 then not long after.

“I think there is every possibility that other countries could follow in the footsteps of El Salvador and make bitcoin legal tender. Most of ‘the noise’ seems to be coming from Latin America at this moment in time,” said Simon Peters.

Lou Kerner is even more explicit about bitcoin and crypto’s chances in this respect, suggesting that it’s mostly a matter of ‘when, not if.’

Central banks and their tokens

That said, Anndy Lian, the Chairman of crypto exchange BigONE and the Chief Digital Advisor to the Mongolian Productivity Organization, says that developed nations will be more interested in central bank digital currencies (CBDCs) in 2022 than bitcoin or any other public cryptocurrency.

“The real crypto push from governments will be more likely to come in the form of central bank digital currencies, most notably in China. There the central bank is looking to use blockchain at the issuance layer for its digital yuan system, which is centralized,” he told Cryptonews.com.

He adds that a drive towards CBDCs may be catalyzed by Facebook (now – Meta), with its Novi app launching as a limited pilot in the US and Guatemala in October.

“If the Facebook initiatives take off then this could spur governments to action, if not creating their own digital currency, in supporting the growth of private sector solutions with improved regulations and support. A good example of this approach is in Ukraine, which voted almost unanimously to legalize and regulate cryptocurrency just a day after El Salvador’s official bitcoin adoption,” he added.

Lou Kerner also suggests that many governments may move more towards CBDCs in 2022, particularly those that feel threatened by bitcoin and other public and decentralized cryptocurrencies.

“Central bank digital currencies will be attractive for other governments looking to leverage technology to provide better financial infrastructure for internal or global use.   There will be some governments who resist out of fear of losing control, similar to countries who resisted the internet,” he said.

CBDCs bring us to the issue of payments, because while it seems likely that investors will increasingly adopt bitcoin and other cryptos as inflation hedges, it’s not clear whether the general public will increasingly use such currencies for making payments.

For Fawad Razaqzada, increasing payment use will follow on from increasing investment, with more holders and owners equaling more opportunities to use cryptocurrency for purchasing goods or services.

“This trend will likely gather momentum as more institutions get involved. So there is little doubt in my mind that 2022 could set a new record for crypto transactions for payments of actual goods and services,” he said.

Some analysts suggest that the use of cryptocurrency for payments is already picking up steam, and that it will therefore only gain further momentum in 2022.

He adds that cryptocurrency is already being used, for example, to incentivize community members to provide value to the community, from gaming (e.g. Axie Infinity) to talent networks (e.g. Braintrust).

“We expect this activity to continue to scale in 2022 and far beyond, similar to how e-commerce is continuing to scale 27 years after Amazon started selling books,” he said.

Likewise, Anndy Lian is another observer who argues that 2022 will only cement what is already happening in 2021.

“The trend towards greater use of crypto for payments has already started, with the recent news in the US that cinema chain AMC will soon be accepting cryptocurrency payments. It comes just a few months after PayPal decided to allow US consumers to use crypto to make purchases and news that Mastercard would be supporting cryptocurrency payments across its network,” he said.

Despite these significant inroads, Ben Caselin urges some degree of caution, arguing that while we see bitcoin’s use in El Salvador, for instance, we’re still very much in a growth phase where market volatility militates against everyday use of many cryptos.

He says, “For Bitcoin to take hold as an everyday payment system and currency, more adoption is needed […] It may take a few more years before we can see Bitcoin being used more for everyday payments globally.”

____
Learn more:
– Bitcoin Lightning Network Is Growing Faster Than You Think
– Altcoins in for a Bumper 2022 as Number of Crypto Traders Set to Double – Report

– Mt. Gox Payouts Nearing, But Is the Market Ready for It?
– BitMEX Boss: El Salvador-style Bitcoin Adoption on the Cards for 5 More Nations

Report: Kenya Set to Scale Up Adoption of Cryptocurrencies in 2022