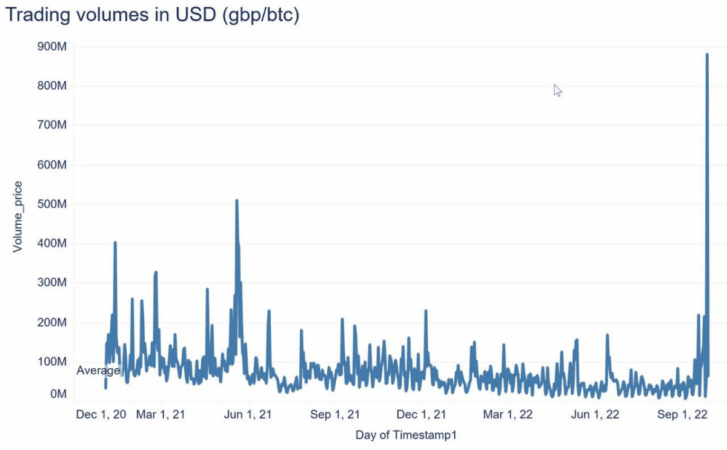 The below is a direct excerpt of Marty's Bent Issue #1269: "Interesting reaction out of the U.K." Sign up for the newsletter here.

Here's a chart that has been lingering in my mind throughout the week. It was shared by the team from Coinshares and highlights bitcoin trading volume in the U.K. earlier this week while the British pound was in free fall. As you can see, volumes exploded to just under $900 million, reaching their highest level in more than two years. It's hard to discern the intent of those who were trading bitcoin in size over in the U.K. It could have been people looking to take advantage of quickly developing arbitrage opportunities, people looking to sell bitcoin to get liquidity to service failing trades or people looking to purchase bitcoin as a hedge against rapid currency debasement.

We can't say for sure, but if the volumes were driven by those seeking safety in bitcoin, it would represent a very interesting turning point for the nascent digital monetary good and how it is being viewed by the broader market. One has to imagine that there are foreign exchange traders surveying the landscape of rapidly debasing fiat currencies across the world who are beginning to panic, especially when currencies like the pound and the yen are faltering in the way they have been over the last couple of weeks. Even though the dollar is ripping, it is the most polished piece of shit on the pile. Its relative strength doesn't seem so strong when you consider the problems that exist throughout the U.S. economy: inflation is high, energy policy is suicidal and rising rates are beginning to put a massive beat down on U.S. consumers — particularly home owners and those with significant amounts of credit.

With all of that taken into consideration, it isn't hard to believe that more and more people are beginning to wake up to the fact that bitcoin is a very attractive asset to leverage as a hedge against this insanity. The network is distributed, its supply is finite and it is easy to possess without taking on any counterparty risk. When compared to other currencies, bonds and stocks in a world on fire, bitcoin's superior properties standout like a sore thumb. Who knows whether or not the exchange volume out of the U.K. is indicative of a growing acknowledgement of bitcoin's value proposition, but you should definitely have this potential trend on your radar, especially considering how much wealth has been destroyed so far this year.