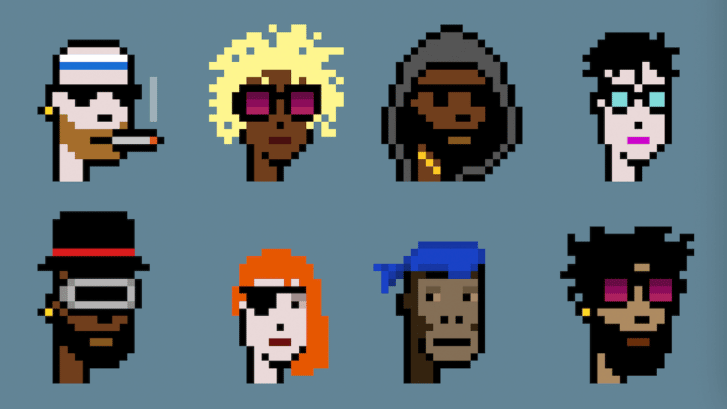 CryptoPunks are iconic in the crypto world, and the project spurred countless imitators as it popularized tokenized NFT profile pictures. But with a new owner in the form of Bored Ape Yacht Club creator Yuga Labs, we’re starting to get a sense of how the new steward plans to expand the utility of the Ethereum NFTs and push the brand forward.

Yuga Labs acquired the CryptoPunks and Meebits properties from original creator Larva Labs in March, along with a sizable stash of NFTs from both collections. In June, the firm hired Noah Davis, who previously headed digital sales at auction house Christie’s and sold Beeple’s $69 million NFT, to oversee the future of CryptoPunks as its brand lead.

Davis told Decrypt that the opportunity was initially floated to him by Guy Oseary, the veteran music industry manager and former label executive who represents Yuga Labs. Oseary was vague about the position at first, but assured Davis that it would be a job worth taking. Once Davis heard the full details, he agreed.

“This is an opportunity that I could not refuse,” said Davis. “It’s my dream job.”

He’s spent the last several weeks meeting with CryptoPunks owners to discuss their feelings on the collection, which has yielded dozens of NFT sales of at least $1 million apiece—and over $2.3 billion worth of trading to date, despite being free to mint at launch in 2017.

Alongside the acquisition in March, Yuga Labs also announced that the Web3 startup will grant full commercialization rights to CryptoPunks holders, enabling them to create projects and derivative products based on their owned artwork. That’s what Yuga Labs already offers Bored Ape Yacht Club owners, and it will extend the rights to Meebits holders, as well.

CryptoPunks owners will be granted those rights on August 15 when the IP licensing agreement is released. The end result is ultimately the same as the Bored Apes, said Davis, but there’s a key difference: while the Bored Apes’ commercial license is short and sweet, the CryptoPunks and Meebits license will apparently be quite a bit longer.

“We wanted to make sure that with the license we give to Punks, we're expanding into some of these newly-defined gray areas,” said Davis, “giving more protection where we can and more explicitly describing what it is that the license does, and also what it doesn't do.”

Several NFT projects have struggled to navigate commercialization rights grants over the past year, a process Davis describes as a “whirlwind shitshow for everyone.” He said that there are key additions to the CryptoPunks license that aren’t present in the Bored Ape Yacht Club license—which, Davis clarified, will not be updated or expanded to match the new Punks and Meebits terms.

As with the Bored Apes, licensing rights are tied to each individual NFT. But one of the “gray areas” that the CryptoPunks license describes is that if a Punks owner sells his or her NFT, he or she can “continue to use and profit from what they have already created and published,” per a tweet from the official CryptoPunks Twitter account.

Asked for more detail on how that specific model works, a Yuga Labs representative told Decrypt to “refer to the full license once released on August 15.” Otherwise, Davis said that the primary license limitations are that Punks cannot be used to create hateful content or for illegal purposes. Otherwise, anything else is fair game for holders to create and profit from.

Davis said that while the brief Bored Apes license is “super punk rock,” he believes that legally it’s “better to be exhaustive” as Yuga Labs draws up new commercial use licenses for its recently-acquired properties.

Luxury jewelry brand Tiffany & Co’s recent NFTiff drop is an example of what’s possible with the new license. That launch let CryptoPunks holders purchase one of 250 Ethereum NFTs for 30 ETH apiece (over $50,000 at the launch) and then exchange it for a physical pendant based on the holder’s owned CryptoPunk image.

That wasn’t an official Yuga Labs collaboration, the CryptoPunks account tweeted, but rather an initiative between Tiffany and Web3 infrastructure provider Chain—the latter firm’s CEO holds the record for the most expensive Punk purchase. Davis described the Tiffany drop as “a great example” of how Punks commercial rights can be tapped for new projects.

Granting holders commercialization rights finally addresses one of the major complaints amongst holders, as Larva Labs had previously waffled on whether or not to give such rights. One prominent holder, the pseudonymous 4156, ultimately sold his CryptoPunk (#4156) in December 2021 for over $10 million worth of ETH following dissatisfaction over IP rights.

Solving that bubbling complaint is one piece of Yuga’s CryptoPunks plan. Another, Davis said, is to provide opportunities to better connect the community of holders, addressing another common gripe that Larva Labs had been too hands-off in the past.

“The community is the utility,” Davis asserted, even while acknowledging that “community” and “utility” are overused terms in the NFT space to the point of parody. However, he said he believes that there’s truth to the statement, and finding new ways to connect and engage holders is one of his chief priorities.

“It's pretty clear that CryptoPunks [holders], generally speaking, are some of the most talented builders, storytellers, and creative people in Web3,” Davis told Decrypt. “Amplifying community is the most important thing for most Punks.”

How Yuga Labs plans to turn CryptoPunks into a revenue-generating business remains to be seen, however. CryptoPunks have a 0% creator royalty, which means Yuga gets no cut of secondary sales at present.

Yuga recently changed the Meebits royalty from 0% to 5% to fund future initiatives—a move that yielded mixed reactions from the community—but there’s no immediate indication that the same will happen for Punks.

“I think that for now, the idea is not to focus on turning CryptoPunks into another golden goose—because there are already a few golden geese out there for Yuga,” said Davis. “In the long term, of course, that's going to be part of the agenda and maybe the internal roadmap.”

Yuga’s purchase of the CryptoPunks IP also raises questions as to how it will be integrated into the startup’s grander Web3 ambitions, including the upcoming Ethereum metaverse game, Otherside. We’ve already seen a Punk in the teaser trailer for the game, but Davis said that they’re wrestling with questions about how Punks fit into a Bored Ape-centric world.

“Punks were minted in 2017, created a long time ago in crypto time—decades in crypto time,” he said. How they’re ultimately represented in Otherside remains an “open question,” he added, and said that he’s “aggregating the vibes” from Punks owners that he speaks with.

There’s significant cultural cachet to CryptoPunks among crypto enthusiasts, which could hold other benefits for Yuga beyond trading royalties and revenue-generating initiatives. CryptoPunks are not only some of the most valuable NFTs ever sold, but they’re increasingly iconic and have been massively influential in the NFT space.

“How cool is it to own the cave paintings of Web3?” Davis said of CryptoPunks. “That’s incredible clout, in and of itself.”

That ethos, along with Davis’ own background, suggests one avenue that Yuga Labs intends to pursue in the future: making the case for CryptoPunks as an important piece of modern art.

“A focus for me is to really ensure that people regard CryptoPunks as art,” he explained, “and establish that legacy as artwork, as well as an incredible use case for this new technology of the non-fungible token.”

CryptoPunks have been sold at auction before and at eye-popping sums, and Davis himself helped facilitate the sale of a bundle of nine CryptoPunks for nearly $17 million worth of ETH at Christie’s in May 2021. But for Davis and Yuga Labs, the goal is less about driving top-dollar sales and more on securing broader appreciation for Punks and their influence.

“You don't have a lot of institutional recognition for CryptoPunks, seeing Punks in museum collections and on display at museums,” he said. “Those opportunities for liaising with the public are onboarding opportunities for decentralization and Web3 in general.”

“Definitely, focusing on institutional clout is going to be important for me,” Davis added.

SEC Must Turn Over Emails About Ethereum—But It Won’t Help Ripple, Lawyers Say

What is regenerative finance (ReFi) and how can it impact NFTs and Web3?