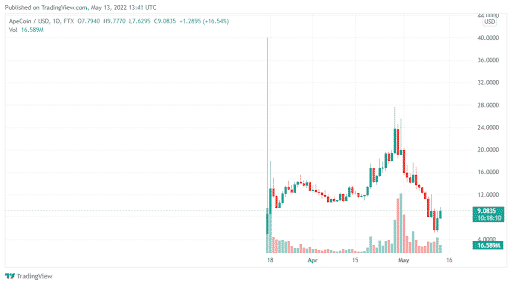 Apecoin (APE) is trending upwards today in line with the broader recovery in crypto. The coin appears to have paired some of the losses we saw in the last few days. But can this renewed bullish momentum push the coin above $10? More details to follow below but first, some highlights:

The road towards $10 for APE now seems very plausible. After two weeks of weakness, APE has decisively trended upwards. Although the broader crypto market has recovered from losses over this week, APE is outperforming the market by almost 3 times.

If indeed the current momentum breaks the $10 mark, it will open a new window of opportunity that could allow this NFT-based coin to surge even further. In fact, it is plausible that APE could rally towards its April highs and cross above $20. This will represent gains of up to 200%.

Despite this, it is important to note that this renewed uptrend could just be a normal pullback. After all, the crypto market had crashed over the last few days. It was expected that the downtrend would stop slightly as it always does. If APE is not able to hit $10 in the coming days, we may see more losses again.

Can you profit from APE right now?

APE has performed quite well in 2022. But after hitting highs of around $24, the coin has faced a very steep and costly correction. Right now, APE is still trading at a huge discount compared to its previous highs.

While we are not saying the coin will surge towards $24 in a few days, if you want to hold it for some months, this would be the most ideal time to buy.

NFT Show Europe: An Immersive Experience on Blockchain Technology, Metaverse and Crypto-Digital Art
TA: Ethereum Struggles Below $2K, Why Bears Remain In Action
Bitcoin Price Prediction for Today May 26: BTC Price Recovers but under Pressure above $28K
Bitcoin and Ethereum Struggle to Clear Key Hurdles, CELO and SAND Rally
ESG Study Shows Bitcoin Mining’s Potential to Eliminate 0.15% of Global Warming by 2045, Claims No Other Technology Can Do Better
TA: Bitcoin Price Remains In Range, Why The Bulls Need To Take Control